Last week, I had the pleasure to teach children at the Sprouts Cooking Club in Berkeley. I believe they were between the ages of 5 to 14 years. The class was full with 18 children. Several adult volunteers supervised the kids. The class was held at the Whole Foods parking lot under a cozy tent. The Whole Foods Market supplied the ingredients for the class.

I was so impressed by the young children’s enthusiasm and participation. They were well organized with their cutting board, mixing bowl, small pots and knife. They cut the vegetables with great interest (of course, under adult supervision), so finely and in uniform pieces they would put us professionals to shame. I was told some of them were very good at mincing, dicing, and cubing. Best of all, they were proficient at rolling leafy green or herbs and chopping into delicate strips referred to as chiffonade. As they assembled the following mixed vegetable spread, we passed along slices of crusty bread. The little kids were even happy to enjoy it as a cool crunchy salad in small cups by itself. It was nice to see the youngsters enjoying wholesome mother earth’s bounty.

Use this light and easy mixed vegetable concoction as a dip or spread on crusty bread to make vegetarian sandwiches. You can also serve as a side dish salad for lunch.

Just before serving, in a bowl, combine the yogurt, salt and sugar. Beat with a fork until smooth. Fold into the prepared vegetables.

Serves 6 to 8 as an accompaniment or use as a vegetarian sandwich spread.

I was looking for ways to create something nutritious and scrumptious for my children’s school lunches. I developed the idea of combining flaxseed with other…

When I make the pumpkin kofta dish, it takes me close to home, in India. These sentiments are enough to transport me back to girlhood.…

This is a vegetarian version of meat balls, fresh grated pumpkin replaces the meat. Serve with rice or flatbreads. These golden balls of squash can… 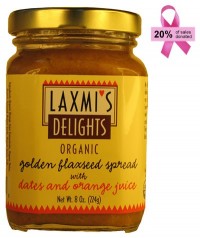 Please check out Laxmi’s Delightstm organic flaxseed spreads and sweet spiced roasted nuts on Foodoro.com. You’ll notice that our products are featured on the specialty…